Conditions were just right for the Bardonia Elementary Turkey Trot this morning.

Sunshine, blue skies and a fairly dry race course awaited the Fifth Grade boys and girls as they exited the school following a series of stretching exercises led by members of the South High School Cross Country and Track teams.

Outside the school, the students were greeted by a large crowd of Fifth Grade parents, students in Grades K-4, teachers, staff and Principal Michelle Zernone. The race, now in its sixth year, began following instructions from the Turkey Trot founder and director, Fifth Grade Teacher Alice O'Hara. When First Grade Teacher Allison Boyer finished singing the National Anthem, students were off and running.

Along the way, they were cheered by the audience and crossed the finish line following four laps of the course that was held on grass as well as pavement.

Following the race, the South runners, along with their coaches Maureen McNamara and Pete Modafferi, handed out bagels, water and hot chocolate.

Congratulations to all of the participants at the Bardonia Elementary Turkey Trot, and many thanks to all of those people in attendance to cheer and support the runners! 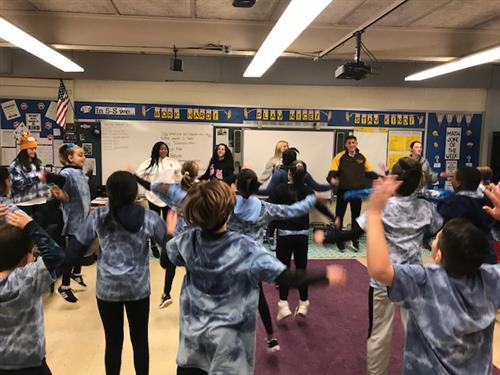